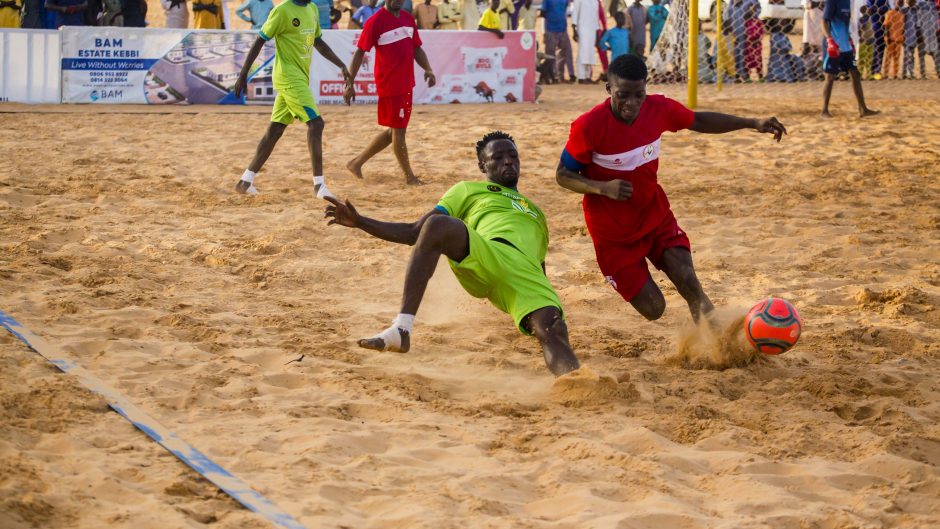 Round 2 of the 2022 Nigeria Beach Soccer League kicked off on Monday 2 May in Kebbi with Kada, Smart City, Kogi and Kebbi picking maximum points.

Kebbi BSC 7-0 Nmanko BSC
In the opening match, Kebbi overran Nmanko Patigi by 7 goals to nil. Emeka Ogbonna’s 6 min goal in the 1st period opened up goal rains, with Kebbi Captain Ahmed netting the second in the 7th min to end the 1st period. The trio of Fuad Badmus, Emeka Ogbonna and Ekene Adams took the goal lead to 5 for the host, but Emeka Ogbonna hat-trick in the 3rd period sealed the victory for the defending champions.

Kada BSC captain Dozie Frank opened the scoring in the 7 mins in the second round, he increased his tally with a brace before Igbogbo BSC came back with an equalizer to end the 2nd period at 2-2.

In the 3rd period, Iretimide Ayo got his brace for the Igbogbo boys, but unstoppable Dozie Frank secure the win for Kada.

Sadiq Balogun of Nmanko drew the first blood as early as the 1st min in the first period but it didn`t last long as Victor Tale shot to beat the goal of Zubair Mohammed immediately from the restart.

Kogi BSC took the lead to 2-1 to end the 1st period. The 2nd period recorded a brace from Victor Tale and 3 goals for the Nmanko Patigi. In the 3rd and final period, both sides managed to get two goals more goals but the Kogi boys had the victory.

Smart City’s Ali Toheeb netted his hat-trick to extend their lead to 4-1 in the 3rd and final period. Kelme Galaxy’s two goals in this period were not enough to stop Smart City’s 4-3 victory.

In the evening matches of the day, it was a thrilling encounter between Badagry Warriors BSC and Kogi BSC in a game that ended 4-4 at regulation times. Both sides couldn`t find a victory even after extra time as they dragged the game into penalties which gave Badagry 5-4 victory to secure a point.

Kelme Galaxy 2-4 lost in its second game of the day to Kada BSC. The Benue boys put up an impressive fight but couldn’t match the experienced Kada who are runners up at the 2021 edition of the league.

The last match of the day had Kebbi BSC securing its second full point at home after a 4-2 win over Kwara.