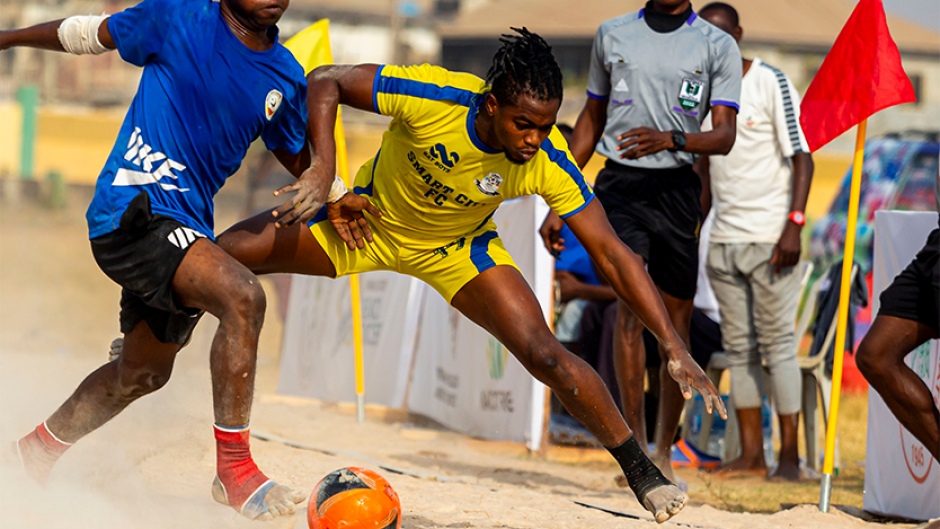 Defending champions Kebbi BSC and Kada BSC remain perfect leading groups A and B after the conclusion of round one matches of the 2022 season of the Nigeria Beach Soccer League (NBSL) at the weekend in Ilorin.

Ten teams from across the country in two groups competed in a round-robin format over 4 match-days, recording a total of 160 goals in 20 matches, an average of 8 goals per match in an exciting round that saw Sand Eagles legends Isiaka Olawale, Victor Tale and Emeka Ogbonna return to active roles playing and inspiring their sides.

The final match-day in Ilorin saw intensive games as both the experienced teams and debutants fought hard to secure more points going into the second round.

Smart City 8-5 Niger
Debutants Niger BSC yet to win a match, went tough on Smart City but their impressive efforts weren’t enough to give them the much-needed victory over the experienced side. Alli Taheeb’s double hat-trick was enough to help Smart City secure three points safely in the bag.

Badagry Warriors 1-6 Kebbi
Face to face with Africa’s top-ranked club, who claimed the 2021 edition of the NBSL was Badagry Warriors who were rattled right from the first period when Taiwo Adams opened the scoring sheet and Ekene Obi made it two before the first whistle. Badagry boys had a mountain to climb for the remainder of the game.

Kogi 7-4 Nmanko Pategi
Following the disappointment of not winning any game yet, Isiaka Olawale’s led Nmanko Pategi entered the pitch with one goal, win or win. The Pategi boys found the back of the net 2 minutes into the game, but couldn’t keep up as they were up against a much more tactical side inspired by Victor Tale.

Tale’s opening brace was all the Kogi boys needed to take lead in the second period which Pategi never recovered from.

Kada 5-4 Igbogbo Kingdom
Kada BSC with an unbeaten run, winning three games out of three got a slim victory against the Igbogbo BSC, in an encounter that could have been won by either team. As Igbogbo boys gave it all they had but failed to convert most of their efforts.

Kelme Galaxy 6-3 Smart City
In their second match of the day, Smart City was looking to consolidate on their victory earlier but met stiff resistance from Austin’s men who took an early lead in the game and made sure their opponent never recovered.

Kelme Galaxy is now with six points after winning only 2 games out of four from this round.

Kebbi 4-2 Kwara
In the last match of the round, the host Kwara displayed resilience and spirited effort in front of the home crowd but eventually lost to the defending Champions Kebbi by four goals to two.

At the end of this first phase, Kaduna and Kebbi take the top spot on the league group tables A and B respectively.

Speaking to the Press, the League Coordinator, Mahmud Hadejia commended the host for a successful first round, noting that challenges experienced would be taken into account heading into the second stage of the league in Lagos this march.