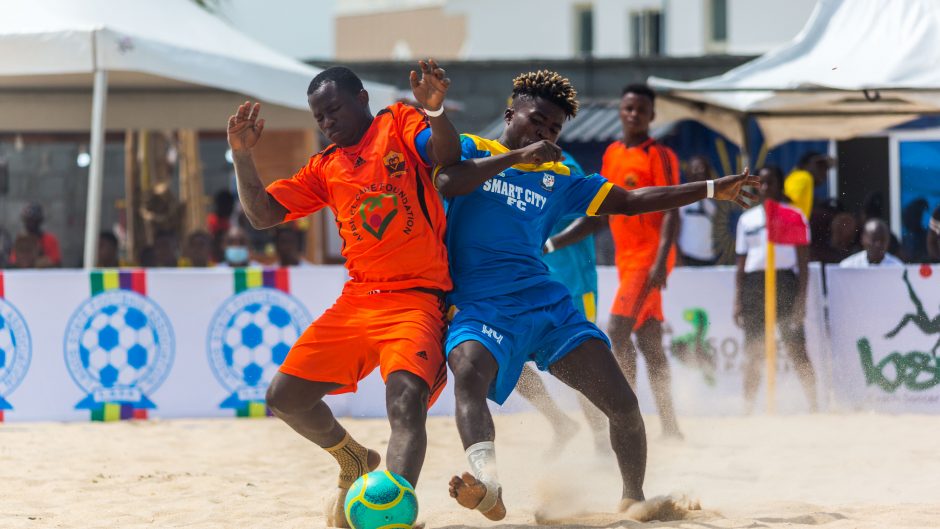 First round of Nigeria Beach Soccer League concluded in Lagos

The opening stage of the inaugural Nigeria Beach Soccer League reached a dramatic climax on Easter Monday at Landmark Beach in Lekki, Lagos.

The eight teams battled in three matchdays in the first stage. On the final day, Smart City made sure Edo HCF ended the round without a point as they beat them 5-2, and four goals from Taro Seun made sure the Lagos club finished the round with six points after recovering from their 6-4 Saturday loss to Kada BSC.

The second match, between Badagry and Anambra, proved to be a one-sided meeting as Anambra were on the backfoot for much of the game, and failed to convert any of their chances. A more clinical Badagry side came out 4-0 winners.

In the other matches, Kada BSC continued their unbeaten run, this time getting the better of Igbogbo Kingdom with the game finishing 4-2.

The climax of the day was, however, the shock 3-2 defeat of Kebbi by Kwara, who picked up their first three points in the competition. Even a late goal from Kebbi’s star veteran, Emeka Ogbonna (who won the Top Scorer award at the last edition of Copa Lagos with Nigeria), wasn’t enough to salvage points from the match.

Badagry top Group A with six points, while Kada lead Group B on nine points.

“I’m very excited that we are finally kicking off the Beach Soccer League in Nigeria.” Said Mr Pinnick. “I’m here to officially endorse this project and to also show the Federation’s full backing.

I want to appreciate everyone that made this happen because it has been a collective effort despite the many hurdles. We will take beach soccer to greater heights of international relevance.”

The league will consist of four stages and locations across the nation, which already have existing beach soccer facilities: Lagos (April), Kebbi (May), Kwara (June) and Kaduna will host the Super finals in July.